Suttle Stone Quarries was the key sponsor of Big Night Out for the third time in a row, a night of clubbing for people with learning disabilities. The sponsorship covered all the costs of the event at Cameo nightclub in Bournemouth, with a record number of around 400 club-goers attending from across Bournemouth, Poole and Dorset. In addition, more clubbers than ever before stayed on the dancefloor until later in the evening due to organisers promoting the national Stay Up Late campaign.

The Big Night Out is Bournemouth and Poole’s club night run by and for people with learning disabilities and features local learning disabled DJs the Mix It Up Kru.

The Big Night Out is facilitated by Suttle Stone Quarries and organised by a collective of Dorset-based organisations including local advocacy and disability rights charities, offering music lovers with learning disabilities the opportunity to go out dancing in a safe and supportive environment. The event attracted club-goers from as far as Sherborne and Beaminster, and the promotion of the Stay Up Late campaign meant that many evening care staff were able to adjust their shift patterns to help clubbers stay on the dancefloor for longer.

Assistant manager at Bournemouth People First, Amanda Frost added “without the support of Suttle Stone Quarries, we wouldn’t be able to put on these amazing club nights! It brings people with and without disabilities together from across Dorset, meeting up with old friends and making new ones.”

Paul Herridge, a learning disabled member of People First Dorset who travelled from Sherborne, said: “The easiest and cheapest way for me to attend was to join People First Dorset on the train and spend the night in a Dorchester hotel. Without all the support and funding, I would not have been able to go, and I really wanted to. Thank you.”

Jonathan Wilding, a learning disabled member of Poole Forum said “the Big Night Out gives me a chance to dance away. I came in a minibus tonight – without this transport, I would find it very difficult to go clubbing.”

Chris Suttle, of Suttle Stone Quarries said: “The evening was a great success. I have been passionate about trying to facilitate the sort of evening at a top club which many people take for granted, but is often difficult for many with disabilities and learning difficulties, such as my son James.”

Through Suttles’ sponsorship and the hard work of all the people involved, that dream has become a reality. I would like to thank all the groups involved for their enthusiasm and effort in organising such a great, inclusive event.”

The Big Night Out is a partnership between self advocacy agencies Bournemouth People First, People First Dorset and Poole Forum with Borough of Poole Arts Service, Cameo Nightclub and sponsorship from Suttle Stone Quarries. 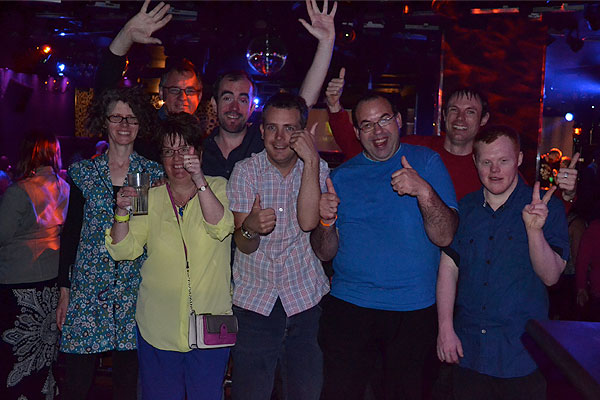